We’re encouraging businesses to consider employing people with early onset dementia or keep on those who may have received a diagnosis.

With some reasonable adjustments, it’s still possible for people with the condition to continue working and they shouldn’t have to give up work immediately if they are not ready.

Thanks to the recent documentary on Channel 4, The Restaurant That Makes Mistakes, it’s become clear that people with an early diagnosis of dementia are still very capable of working.

The programme followed a group of volunteers, with different forms of early onset dementia, as they were trained to run their own restaurant and many of them excelled. In one of the episodes, one of the volunteers became distressed as she couldn’t find her locker containing her belongings as all the lockers looked the same. Another staff member then put photos of each person on their dedicated locker in order to help and reduce stress and it is small adjustments like this that can really help someone in the workplace.

We want to encourage businesses out there to give people with dementia a chance in the working world. They shouldn’t be written off because of their diagnosis. In our experience many people with dementia are very capable of carrying out tasks and allowing them to do so makes them feel much more valued and gives them some much-needed confidence.

Other adjustments in the workplace that can be made could include rearranging working hours, so they are more flexible, allowing the person to work in a quieter area of an office or something as simple as adding helpful signs and labels around the place.

The Alzheimer’s Society’s Creating a Dementia-friendly Workplace Guide says in a survey of employers 89% of respondents recognised that dementia was a growing issue for their organisation.

A survey of 888 HR decision makers in small, medium and large businesses carried out by the Centre of Economics and Business Research found one in 10 businesses had employed someone living with dementia.

Most importantly it’s all about supporting the person with dementia in your workplace and we feel that it doesn’t take too much effort for businesses to do this. In the long run, it not only benefits the employee, but the business as well, as your staff will remain loyal and hardworking and you will be known as a more inclusive employer. 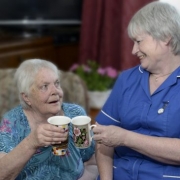 Helping a person with dementia vote in a General Election

Driving with a dementia diagnosis

Top tips on teeth brushing for people with dementia

This site uses cookies. By continuing to browse the site, you are agreeing to our use of cookies.

We may request cookies to be set on your device. We use cookies to let us know when you visit our websites, how you interact with us, to enrich your user experience, and to customize your relationship with our website.

Click on the different category headings to find out more. You can also change some of your preferences. Note that blocking some types of cookies may impact your experience on our websites and the services we are able to offer.

These cookies are strictly necessary to provide you with services available through our website and to use some of its features.

Because these cookies are strictly necessary to deliver the website, you cannot refuse them without impacting how our site functions. You can block or delete them by changing your browser settings and force blocking all cookies on this website.

These cookies collect information that is used either in aggregate form to help us understand how our website is being used or how effective our marketing campaigns are, or to help us customize our website and application for you in order to enhance your experience.

If you do not want that we track your visist to our site you can disable tracking in your browser here:

We also use different external services like Google Webfonts, Google Maps and external Video providers. Since these providers may collect personal data like your IP address we allow you to block them here. Please be aware that this might heavily reduce the functionality and appearance of our site. Changes will take effect once you reload the page.